This day was the culmination of three intense training days at school and numerous after school sessions of the Discussion & Debate group. A total of 250 students from nine different high schools participated in this conference.

Since a few years now the AIS team consists of not only AIS students but also students from the Ritzefeld Gymnasium in Stolberg, Germany. A super combination which benefits all as the students already learn to cooperate and interact internationally during the Discussion & Debate sessions.

Although the team originally had twelve participants that went through the training sessions, we ended up travelling to Nijmegen with nine students. All of them super motivated, well prepared and also a little nervous. 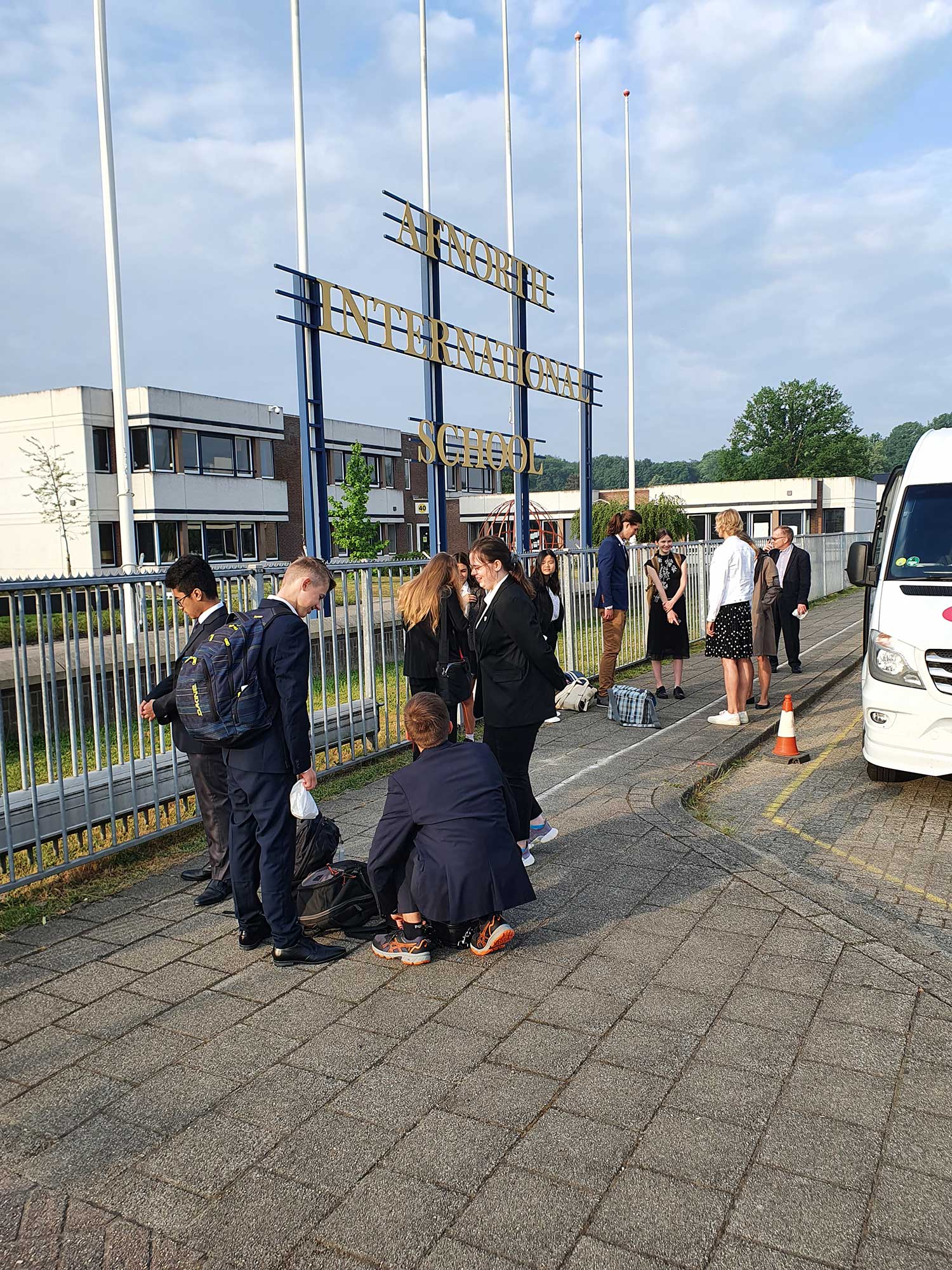 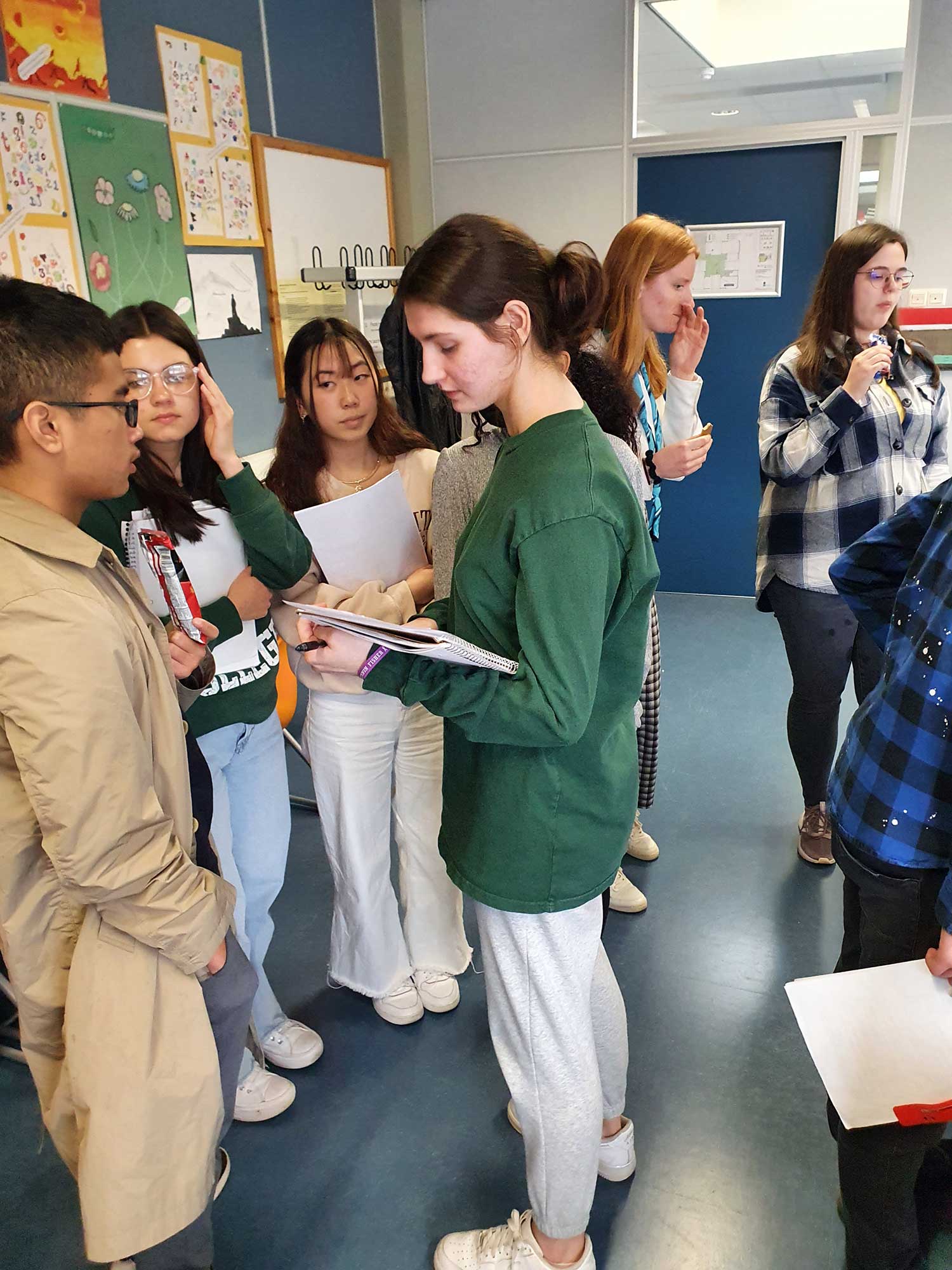 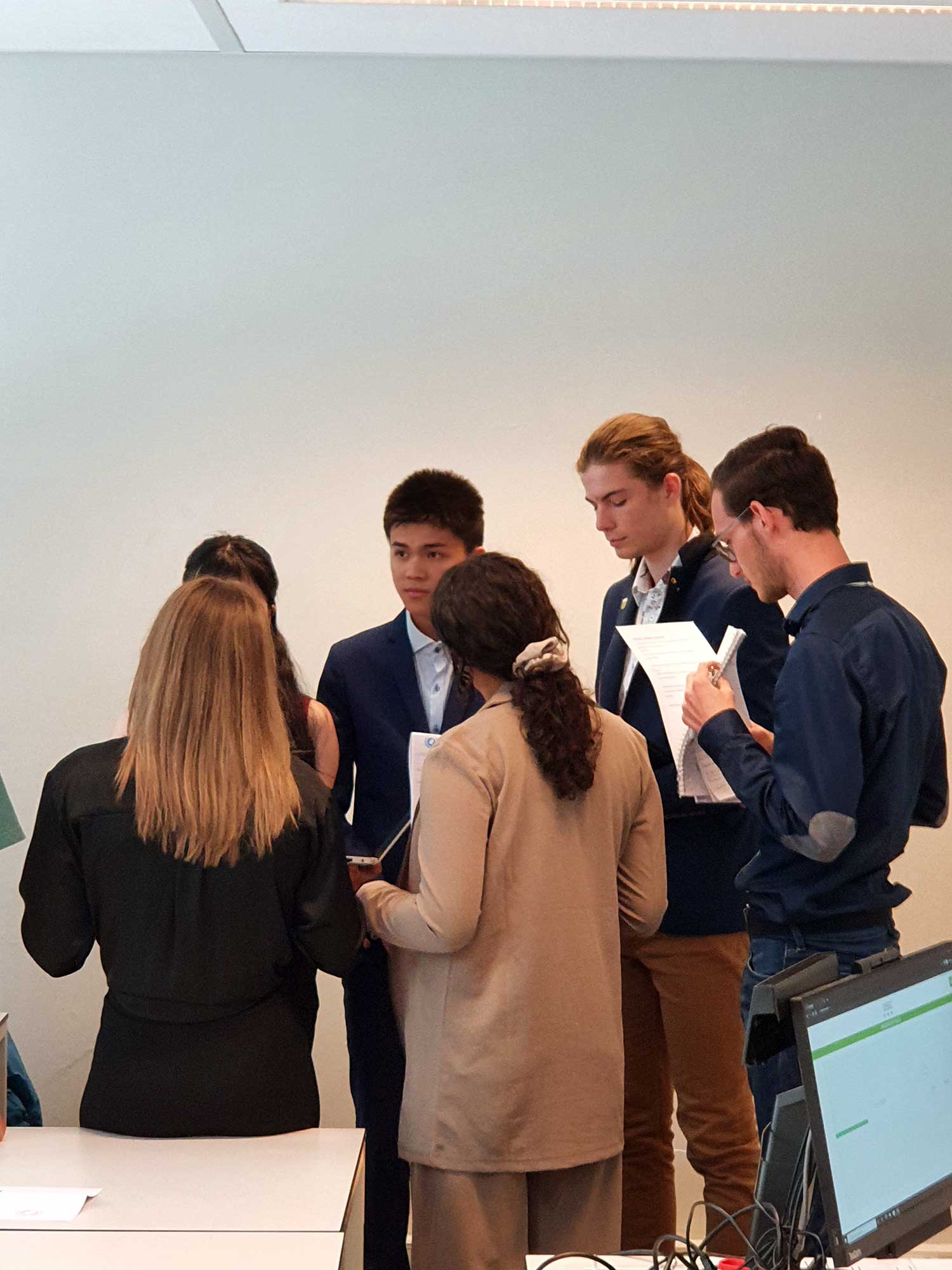 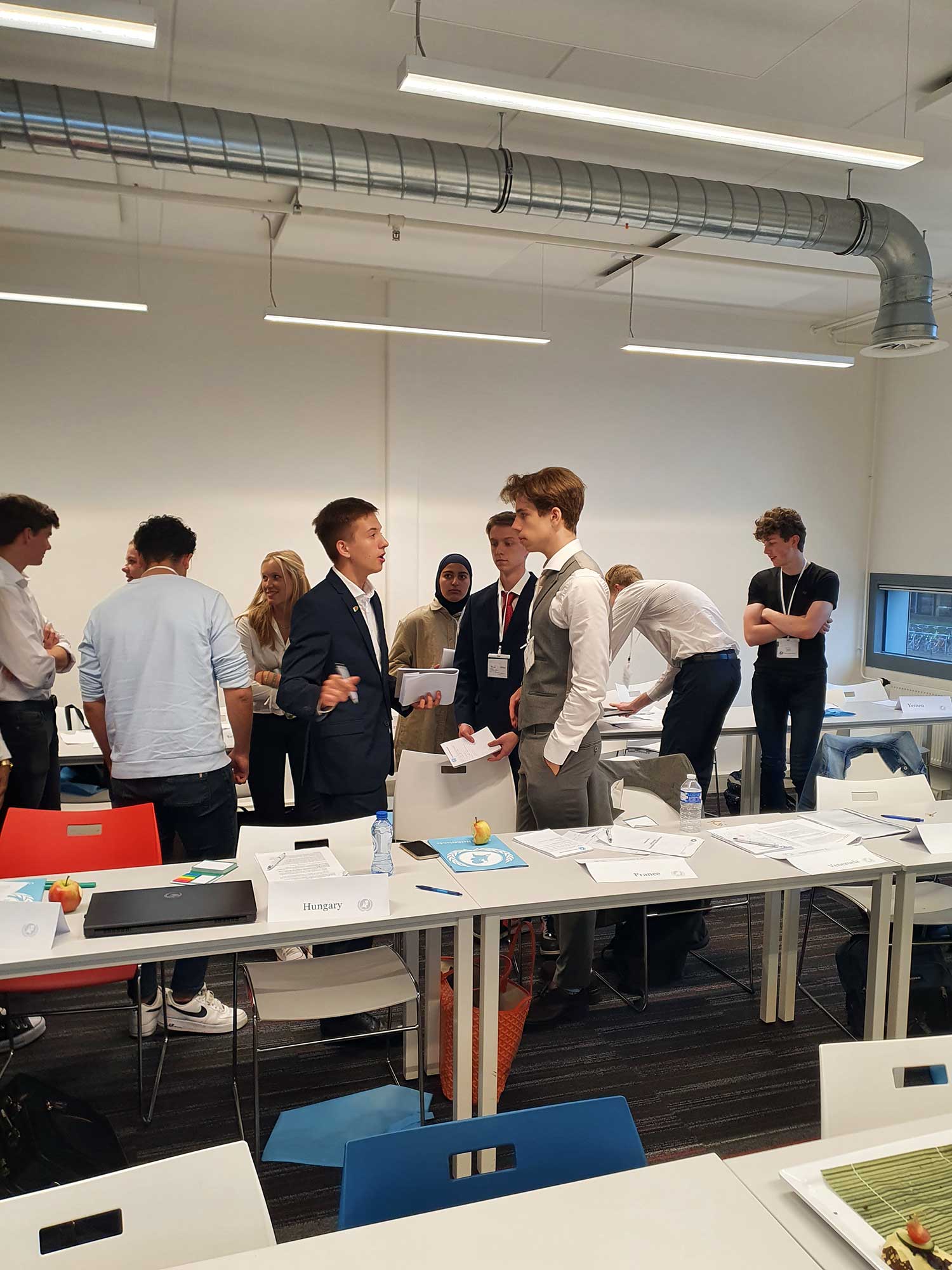 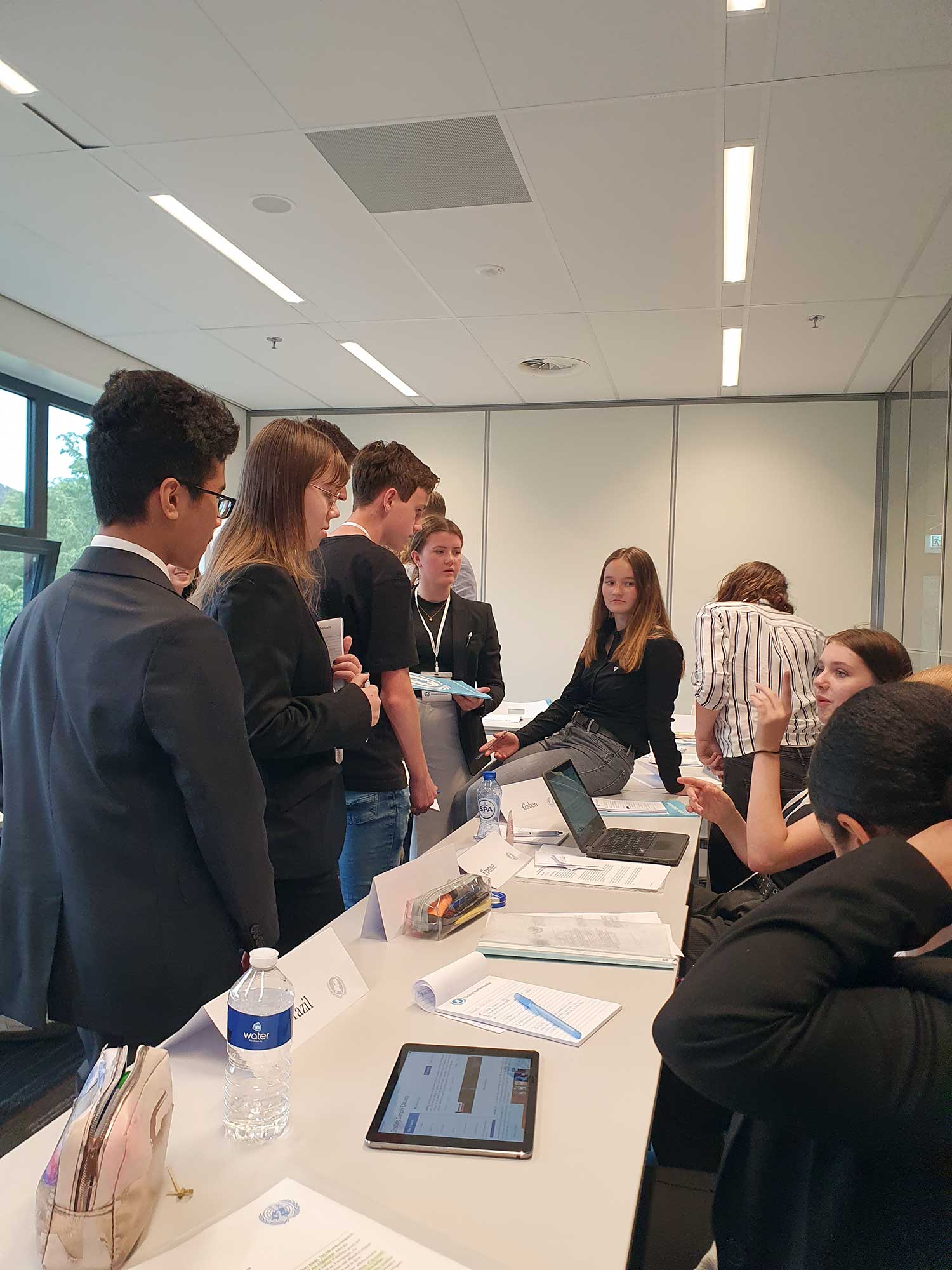 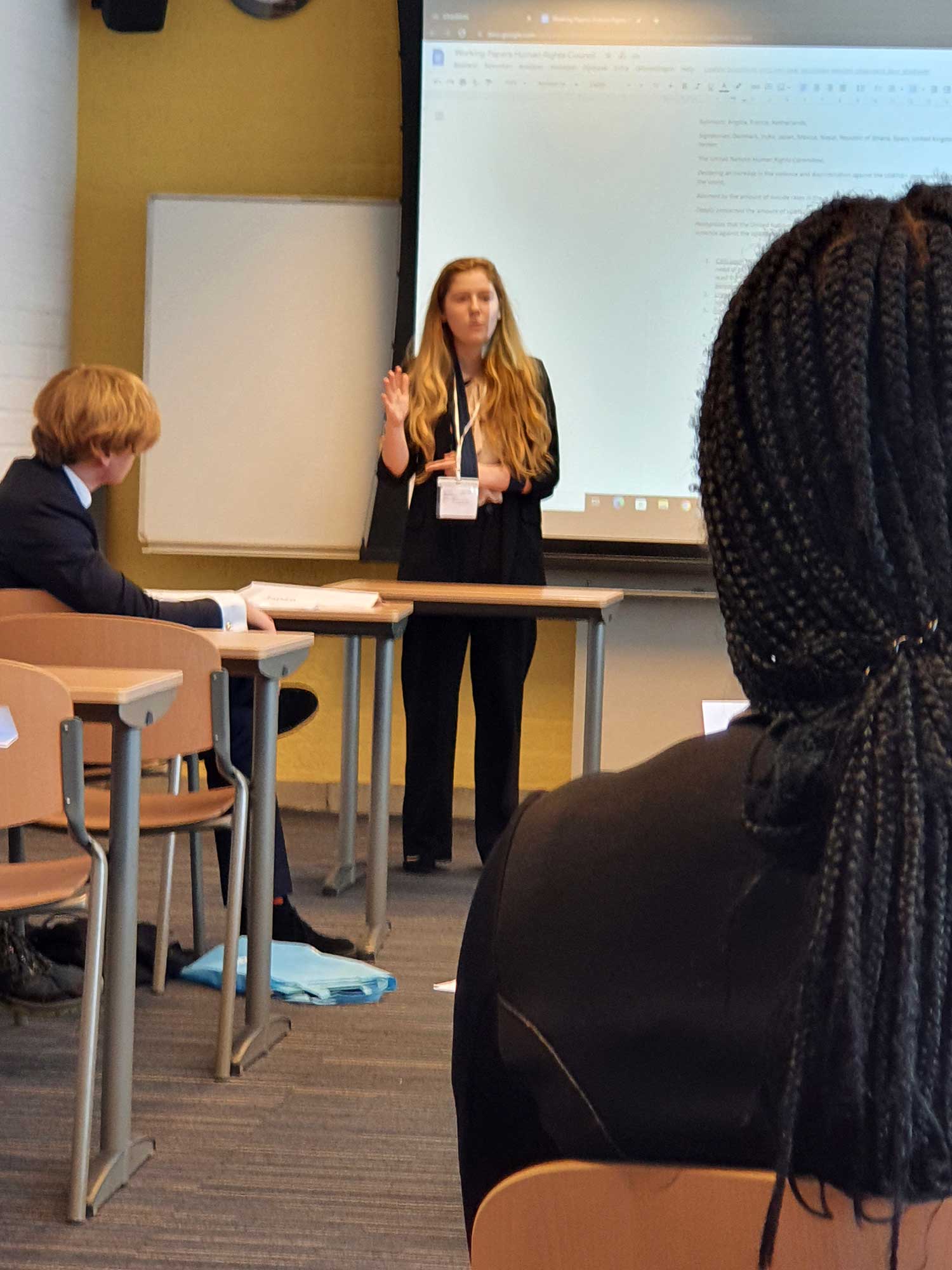 Prior to the conference the students all had to write a Position Paper stating the nation’s intend in the debate. They also had to prepare an opening speech and of course had to research their respective nation and its position on the topic of debate.

Our student team was well prepared and eager to make their standpoints in the debates, moderated and unmoderated caucuses and resolution writing processes. In fact our students took the lead in many committees thus showing commitment and expertise which resulted in respect from other participants as well as praise and admiration from committee chairs and MUN Leadership.

Seven committees passed a resolution at the end of the day of which three were initiated by the AIS team.

Florian Schwabe and Arianna Pfeil cooperated in initiating, writing and passing a resolution in UNESCO. Krzysztof Bryla and Julia Hausmann were a super strong team in UNHCR. They initiated , defended and were able to receive support from other nations in passing their resolution. Leonard Kolewa took the leading role in DISEC. Respected by the other nations for his speeches, skills in debate and willingness to seek cooperation with other nations, he also was able to pass a resolution.

Veronica Burghart took the lead in UNHCR. After long debate and many moderated and unmoderated caucuses the resolution unfortunately failed in the last voting round. Sometimes the voting outcome is surprisingly unexpected.

The topics discussed in the various committees where our team was represented:

Topics in the other two committees:

Arianna and Florian were the first to have their resolution passed after initiating, writing, defending, amending and debating to get enough support in their UNESCO committee.

Being one of the smaller school delegations at this conference our team did extremely well. It is one of the most successful conferences AFNORTH International School has attended.

Besides the three resolutions that were passed we have also received many compliments on the roles the AIS team members have played throughout the day.

All students received a certificate of participation and….

The AIS team was also runner up for Best Delegation Award and received extra praise from the Board of the Organization for the high level of knowledge, skills, student leadership and participation in the committees .

Inspiring Respect, Resilience and the ability to Think and Act Inclusively in our international environment
Back
We are using cookies to give you the best experience. You can find out more about which cookies we are using or switch them off in privacy settings.
AcceptPrivacy Settings